Agencies in the news, talent on the move, insights you can use, job opportunities, and more

Thanks to everyone for the great response to the new format last week. I have taken the suggestions and incorporated some improvements in this edition. Keep the feedback coming!

New studies call into question how well the C-suite is supporting communications, as well as the effectiveness of PR leadership itself. More on that below.

Meanwhile, the outlook for agencies appears positive, with most communicators forecasting stable or growing budgets for 2020. At the same time, M&A activity continues to be strong while one of the biggest spenders (Accenture) signals it plans to continue its acquisition strategy for growth.

And now on to the latest news, insights, job openings, and more.

JURASSIC PR. The PRWeek and Boston University Communications Bellwether Survey found that 40% of corporate PR pros feel that company culture holds back change with comments like “Dinosaurs in the board” and “Dinosaurs running it.”

CRISIS OF LEADERSHIP? Peppercomm founder & CEO Steve Cody highlights the recent Report Card on PR Leaders released by The Plank Center for Leadership in Public Relations and asks: “Does the PR profession care about improving its leadership?” Cody notes that “Leaders gave themselves a grade of A-minus in five fundamental areas of leadership: organizational culture, leadership performance, organizational trust, work engagement and job satisfaction. Direct reports, however, gave their leaders a highly mediocre grade of C-plus!”

2020 FORESIGHT FOR PR BUDGETS. A recent Ragan PRDaily survey of 300 communicators found that a majority expected no significant change to their budgets next year, but those who see an increase coming outnumber those who project shrinking resources by more than 2-to-1.

ACCENTUATING ACQUISITIONS. PRWeek reports that Accenture Interactive “has passed $10 billion in annual revenue, making it as large as Interpublic Group, the world’s fourth-biggest marketing holding company.” Accenture CEO Julie Sweet says that expanding the group via M&A is an “important focus point.” The consulting firm made waves with a half-billion dollar acquisition of Droga5 earlier this year.

DISRUPTION NEEDED? Procter & Gamble Chief Brand Officer Marc Pritchard argues that agencies need to “disrupt [themselves]” to find “different ways of working” and says it is doing that itself with its own agency partners and holding companies.

CRYSTAL BALL. Forrester Research has kicked off a new project on the “Future of Services” that will include a look at agencies and consultancies.

WORKING OT. Starting January 1, US agencies will need to comply with new overtime rules that set the minimum salary threshold at $35,568 before an employee can be considered to be exempt.

Next Fifteen Communications acquired the US division of Health Unlimited, which it will rebrand as M Booth Health.

London-based Quatro expands into Scotland with its acquisition of System2.

Red Havas has signed a partnership agreement with Tokyo-based Sunny Side Up to gain a foothold in the Japanese market.

The New York Times announced it would shutter HelloSociety, the influencer-marketing agency it acquired from Science Inc. in 2016. The remaining assets of the firm will be moved to Fake Love, another NYT-owned brand.

Edelman Chief Operating Officer Matthew Harrington received the additional title of Global President. He is the first person without the Edelman surname to hold that role

Paris-based Avisa Partners has established a US outpost and named Eric Bovim as U.S. CEO. Bovim joins from Signal Group DC where he was Managing Director.

Neil Jones was promoted from Chief Financial Officer to Chief Operating Officer of Huntsworth. His CFO duties will be assumed by Ben Jackson, formerly Head of Finance for the group.

Ogilvy named Rachel Caggiano as Group Managing Director in Washington, DC. The WPP-owned agency also appointed Edward Kim to the role of “Commerce Leader for the agency’s enterprise Digital Transformation Capability and Global Principal, Commerce Strategy & Solutions for Ogilvy Consulting.” (That’s going to be a heck of a business card.)

Agency M&A consultancy The Stevens Group announced that Greg Sherry has joined as an Associate. Sherry has held leadership roles in several agencies and sold his own firm to Publicis.

Nomadic of Scottsdale, AZ hired Rob Buchner as CEO, with founder Tim Washburn moving himself to the role of Chief Creative Officer.

Simone Gupta will move back to Australia and join Sydney-based One Green Bean in early 2020 as CEO. She is currently Managing Director of influencer marketing for @London.

PRWeek US has promoted Frank Washkuch to the role of Executive Editor, reporting to Haymarket Media VP/Editorial Director Steve Barrett.

How agencies can prepare for the coming recession
Part 1 of 2: The economic outlook and early indicators for agencies. (more)

Effective case studies for your agency (featuring Rachel Jacobs)
Why every agency should be producing case studies — and the six key elements that go into a good one. (more)

Would you like to see your agency’s job opening listed here for free? Just send an email to [email protected].

Do you have a question you’d like to see answered in an article, a guest you want to hear from on a podcast episode, or a suggestion for a guide or other resource? Feel free to visit Ask Chip Anything or simply shoot me an email at [email protected].

Do me a favor?

If you find this newsletter valuable, would you help me out by forwarding it to at least one other person who might also enjoy it? 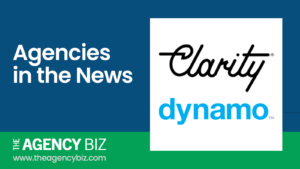 How to be a great podcast guest How to fix an underperforming team When owners do work below their pay grade

Get the latest insights delivered directly to your inbox.